The Anderson Group has won Best Large Development at the First Time Buyer Awards 2021 for the development at Oare Lakes, created in partnership with West Kent. 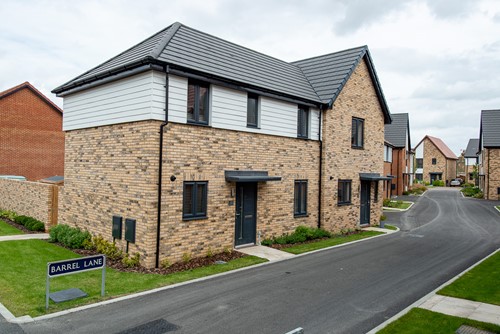 Oare Lakes is a development on the former gravel works and gunpowder factory in the north Kent town of Faversham. The 131-acre site consists of 330 one, two, three and four-bedroom homes, a mixture of shared ownership, affordable rent and private ownership. The site also boasts a country park, lake and a cultural and educational hub. The site is complete with two original cannons and Grade II listed work buildings restored to give acknowledgement to the site’s rich history.

The gravel works and gunpowder factory were closed during World War Two. After being Britain’s centre for the explosives industry since the 17th century it became a prime target for air raids during the war, so the decision was made to close. The Anderson Group renovated the gravel works and aimed to preserve the history of this landmark.

Adam Jenner, Delivery Manager (Development) said, “This development is one of a kind and it’s great to see one of our contractors rewarded for their hard work.”

Work is still ongoing at this site and new homes are coming in Winter 2022.

Money donated from Stanhope Community Centre has given Lantern House residents the skills to plant, grow and cook their own food.

Worried about the end of furlough?

With the furlough scheme ending at the end of September, we know people might be worried about the future.